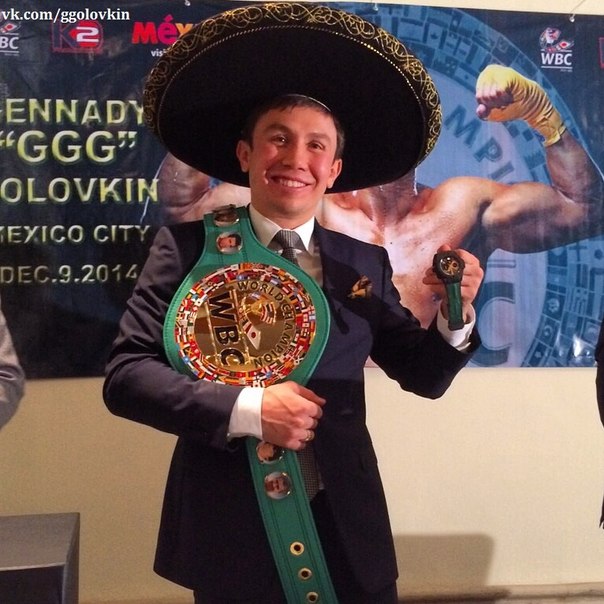 Gennady Gennadyevich Golovkin, known as Triple G or GGG, is arguably the best pound-for-pound boxer in the world. For the last several years, he has also attempted to pass himself off as Mexican. Mind you, he has not denied that he hails from Kazakhstan, nor has he changed his name to Gerardo Gaspar González. But what Golovkin, and his handlers, have attempted to do is appeal to boxing’s large Latinx (and especially Mexican) fan-base by naming himself as the heir to the “Mexican style” of boxing. As with most terms and labels, what “Mexican style“ actually consists of is up to interpretation. It is a fluid, interchangeable, and, at times, contradictory term that has deep roots in the country’s boxing and political history.

If forced to define the term, it would include a style of fighting that is more brawling than boxing, emphasizing an attacking offense with a heavy reliance on body punches, especially the crippling Mexican liver shot that, when perfectly placed, leaves the opponent in agonizing pain. Any defensive focus is incidental. More than anything, the supposed “Mexican style” exudes courage and a willingness to take two punches to land one—believing power and quality, not quantity, will eventually wilt their opponent’s desire.

That “Mexican style” is now at risk of being fetishized. It is an ideal that reduces Mexican boxing to savagery, ignoring that some of the most technically beautiful boxers of the last quarter-century have been Mexican—Ricardo Lopez and Juan Manuel Marquez, to name a couple.

Yet, this is not about telling Golovkin, whose power is reminiscent of Mike Tyson during his prime, to stop with the Mexican act. No one is saying that he can’t only pick the supposed best aspects of what being Mexican in boxing means, while ignoring whatever does not positively impact his economic prospects.

In fact, there is historical precedence for what Golovkin is doing—from boxers, no less.

In 1919, Mexican president Venustiano Carranza welcomed Jack Johnson, the first black heavyweight champion ever, into the country. Johnson was living in self-exile from the United States after authorities convicted him of violating the Mann Act. With the charge being seen as racially motivated, the Mexican government embraced him as a brother, someone who faced similar oppression from the U.S. as Mexico had. Grateful, Johnson even took out advertisements across various black newspapers across the United States, imploring other blacks to move to Mexico.

The ads read: “COLORED PEOPLE: You who are lynched, tortured, mobbed, persecuted and discriminated against in the boasted ‘Land of Liberty,’ The United States; OWN A HOME IN MEXICO: Where one man is as good as another, and it is not your nationality that counts but simply you.” Though Johnson’s implication that racism did not exist in Mexico was wrong, comparatively speaking, the country was much more racially lenient than the United States.

Fifty years later, in 1969, after Jose “Mantequilla” Napoles won the welterweight title, Mexican fans ran into the ring and carried him on their shoulders while he wore a sombrero charro—a Mexican symbol of masculinity and culture. Napoles had lived in Mexico for years, fleeing Cuba after Fidel Castro banned professional boxing. It did not matter that he was from the Caribbean island; fans adopted Napoles as an honorary Mexican.

After his victory, Napoles visited the Basilica of Guadalupe in Mexico City, giving his thanks to the Virgin de Guadalupe who he claimed helped him in winning the world title. Napoles, who later became a Mexican citizen, even co-starred in a movie alongside iconic Mexican luchador El Santo, in the appropriately-named Santo Y Mantequilla Napoles en La Venganza de La Llorona.

Unlike Johnson and Napoles, Golovkin is not attempting to make a life for himself within Mexico, though he visits and even poses for pictures wearing a sombrero charro on occasion. Instead, Golovkin’s entrance into Mexican culture is through appealing to the machismo that is an inherent part of Mexican boxing. While Golovkin and his people do not explicitly mention it, machismo is certainly at the core of his allure.

Samuel Ramos and Octavio Paz are two of Mexico’s most-respected intellectuals who contend machismo comes from a deep, subconscious inferiority complex that leads towards “irrational imitation.” When their imitation cannot duplicate those they wish to emulate, machismo becomes an overcompensation.

According to Ramos in his 1972 book Profile of Man and Culture in Mexico, when a Mexican compares “his own nullity to the character of a civilized foreigner, he consoles himself in the following way: ‘A European has science, art, technical knowledge, and so forth; we have none of the here, but…we are very manly.’” The juxtaposition between a European and Mexican—scientific and manly—helps make sense of Golovkin’s evolution into boxing’s Mexican style.

Three people, all of Mexican descent and each for different reasons, allow Golokvin—an unlikely candidate as a Kazak—to grab on to the Mexican boxing culture and style: Abel Sánchez (his trainer) Julio César Chávez (who epitomizes Mexican boxing in the eyes of many), and Saul “Canelo” Alvarez (who serves as a counter-example).

Sánchez, a Mexican-American from California, first met and trained Golovkin in 2010. Though he found the Kazak to be skilled, Sánchez altered Golovkin’s style from a European one to a more Mexican style. “He was…boxing like a Klitschko,” Sánchez explained. “We’ve been able to modify it and convert it into a fan-friendly style.”

In contemporary times, that style is heavily associated with Julio César Chávez—likely Mexico’s greatest boxer out of the long list they have produced. His importance is as clear as his nickname: El Gran Campeón Mexicano. To his many fans, Chávez is everything a Mexican boxer should be—hard-working, refusing to back down, quit, or make excuses. Chávez personifies what Paz called the powerful “gran chingón,” in his 1985 book The Labyrinth of Solitude and Other Writings. Sánchez’s makeover of Golovkin included studying videos of Chávez, paying special attention to his powerful attacking instincts and devastating body punches.

Chávez is the ideal against which many Mexican fans measure other boxers of Mexican heritage. Unfortunately, these unrealistic expectations will only harm boxers, who are possibly great in their own right but cannot live up to a once-in-a-lifetime talent like their legendary idol.

This comparison at first fell to his son, Julio Cesar Chavez Jr. who, along with his brother, Omar, benefitted from a few suspect decisions awarded to them by judges. As Chavez Jr.’s star declined—beginning with his 2012 loss to Sergio Martinez, a 2013 fine and suspension for testing positive for marijuana, and culminating with his April 2015 loss to Andrzej Fonfara— Saul “Canelo” Alvarez became Chavez’s apparent heir as the face of Mexican boxing.

For years, Golovkin and Sánchez have sought Canelo as an opponent. Their potential fight is one of the few of consequence and, if it ever happens, it’s one that promoters will describe it as the “Fight of the Century.” For the time being, Canelo has offered reasons (some would say “excuses”) for why the fight has yet to occur, ranging from weight differences, to Golovkin asking for too much money, to Canelo stating that since he is the star attraction, the fight will occur when he feels like it. With Golovkin leaving the prime of his career at the same time that Canelo enters his, the fight’s immediacy is more pressing by the day for GGG.

Expectedly, while Golovkin’s Mexican fan base has increased, Canelo’s has diminished. Sánchez and Golovkin have contributed to this exodus, by questioning Canelo’s Mexicanidad at every turn, solely based on his perceived lack of machismo. “Everyone says Canelo is a great champion, the idol of Mexico,” Golovkin says. “The idol for what? For boxing? No. Or as a businessman? Right now, he looks like a businessman.” Similarly, Sánchez claims that if Canelo is unwilling to fight Golovkin and back his self-proclaimed greatness, then “he is not Mexican.”

Golovkin claims to possess the authentic type of machismo, the anti-Canelo—the one who best represents Chávez’s style.

Being the ideal of machismo within Mexican boxing affords Chávez a few perks. He gets the benefit of historical amnesia not given to those in the present—in this case, Canelo. Therefore, Golovkin can wear a Julio César Chávez t-shirt, showing his admiration for Chávez’s willingness to fight anyone. But to do so, Golovkin has to ignore that decades ago, Chávez found himself in a place analogous to Canelo’s.

Back then, Terry Norris was the boxer fighting at a heavier weight limit with Chávez demanding he cut weight plus a $10 million payday. When Norris’s promoters and managers met both demands Chávez still refused to fight Norris. “Chávez is scared to fight me,” Norris said. “I think he’s got a little chicken in him.” The two never fought, though Chávez claimed to not be afraid of Norris—a similar declaration that Canelo has made about Golovkin.

This brings us to Saturday, when Golovkin will fight Daniel Jacobs, his best opposition to date. Still, Jacobs is no Canelo in terms of popularity and drawing power. This means Golovkin will fight again for a far lesser purse than what he would earn against the Mexican star.

After the fight, reporters will engage in their favorite custom: asking Golovkin about Canelo. He will likely continue his appeal to boxing’s large Mexican fan base, claiming Canelo is not macho enough to fight him. By extension, he will make an appeal to Mexican fans, claiming a similarity, even if spiritually, to them. And it will work, as it has so far, because this is boxing—where machismo is an asset and not a serious character flaw. It will also work because of its flattery. Golovkin is one of the foreigners that desperately, and openly, wants to fight like a Mexican.